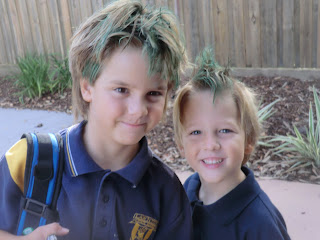 What I REALLY wanted to write about was my afternoon at school on Thursday.

I am going to go in on Mondays and Thursdays from 2 - 3 PM to work with some children on special projects of interest.  Which loosely translated means I got to say that I wanted kids who consistently behaved well and that I get to do some creative extension work with them.  (The school already has a number of programs in place to deal with remedial help and behavioral issues.  Plus, this is the fun part!)

The program is originally meant to be part of Lawnton's 'Gifted and Talented'  program but Andrew's head is swelled enough already as it is.  And on Mondays, I asked if I could work with some kids who might not be excelling academically but who were consistently trying and would benefit from some creative work.  Which means I get to work with Ryan too.

Today the boys and I worked on the library computers on some Power Point presentations.

And, already, I have learned something.

(What?!  You thought this was about the KIDS?!)

Now, in order to make a presentation you need: a topic, a refined manageable topic, an idea of the points in your topic, a plan to research your topic at home, in the library and on the internet, a first draft, a tighter second draft, then an idea of layout and photos and font.  With key words and not your entire essay.


What we did was write whatever we felt like and play around with fonts a bit.

Which at first made me SLIGHTLY nervous since I feel I owe it to the teachers to come up with SOMETHING tangible out of this experiment.

But I remembered the kids I was working with were nine years old.  They (there were only two today, Andrew and another classmate) had never been told just to sit and write about ANYTHING they wanted.  They had never played with layout and font and clip art.  And so I let them experiment.  Andrew's buddy seemed to focus immediately.  On the NFL.  But then also showed an interest in tattoos - when he found the clip art.  And on Indian hip-hop.  Which I personally REALLY wanted to learn more about but.....remembered it was NOT about me!  He spent a LOT of time on font and layout.

Andrew, in the meantime was writing about Sports.  All about sports and its health benefits and about hand sports and leg sports and then the rules of baseball and.....he was vomiting it out faster than his mother!  I was DYING to reign that boy in.  I mean, there was no TOPIC.  He was EVERYWHERE!

Good thing he gave me attitude and I backed off.

I DID try to end the session with a brief remind to pick ONE topic for next week and to think about what points we wanted to mention with regards to that topic.  (Next week I get six kids!)

Andrew's buddy was so thrilled to just have been allowed to let his mind roam.  "Can we do this on other days than Thursdays?" he asked.  Mind you, he wasn't playing computer games.  He was writing about his favourite things.  My hope is that just letting them write a bit - without immediate requirements and editing - will allow them to FIND their own topic.  And, really most importantly, to learn to love writing, a skill that most people have been taught to despise.

Andrew came home and spent the two hours I was still up at the school talking to Ryan's teacher and watching Aidan and Matthew's sports program on the computer working on his presentation.  And you knowwhat, it is actually coming together on its own.

So that lesson one for me is : HANDS OFF!

Trust that the kids will find their way.  (And remember, I am lucky enough to be working with kids I can do this with!)  Let them find their way first, before guiding them all over it.

I'm scared.  Like I said, I do have to answer to their teachers at some point.

But I feel lucky - and I think the kids are lucky - to be trusted enough to try this out.

You let kids loose and I have no doubt they will amaze us!
Posted by Twintensity at 12:01 AM