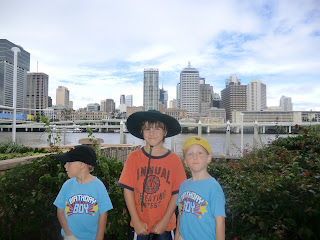 Over a decade ago it was the Columbine shooting in the USA.  Timothy McVeigh.  Angry young men murdering innocent people.

Can we blame radicalized Islam for the former any more than we could blame popularized violence on TV for the latter?

I don't know.  But words hurt.  Sarah Palin telling her followers it was time to reload.  And one of them doing just that and shooting a congressional representative.

These are kids.  They are confused young men.  Man, I was angry all the time as a teenager.  Remember the Pet Shop Boys? "Everything I Do, It's a Sin" was like my own personal logo.  The Who.  AC/DC.  Heavy Metal.  Mosh Pits.  We are angry young people, bursting with hormones.  And who did we blame?  Our parents.  The status quo.  And we were going to take our anger, channel it, and do exactly the opposite.

I think this is called healthy adolescence.

What is not healthy is when adults infiltrate the adolescent psyche and manipulate it for their own purposes.  Man, for a religion that reveres the past, radical Muslims certainly have embraced the internet.  How easy for a lonely, shy, confused young man to become part of a group.  How easy to find purpose.

Arid Uka grew up in Germany.  And while I do have my issues with that country, it is not a bad place to live.  He got to go to school.  His family had a home and work and food.  They are allowed to practice their religion.  And they aren't in danger of being slaughtered.  Life is NOT easy, but it really could have been a lot worse too.

As for the Americans, they stepped in and saved Kosavan ass when noone else in Europe really wanted to.

Dare I say that this isn't at all about religion, or nationality or race?  It's about angry CHILDREN being manipulated for an evil purpose.  How easy to pull the trigger and yell 'Allahu Akbar.'  I'm guessing his girlfriend dumped him.

So what can we do?  How can we keep these young men from destroying themselves - and others with them.

Does it really get back to mom and dad keeping on eye on what their kids are reading and watching on the internet?

Or can we get an international campaign mounted - Muslim and non-Muslim alike - telling these children that they are being used?  Telling them WE care.  Telling them there are other options.

I know.  Let's get everyone listening to The Who again.   Because, after all, the lyrics go like this:

Teenage Wasteland.  If only it were as simple as running over a few mailboxes, like they did in my day.
Posted by Twintensity at 12:01 PM