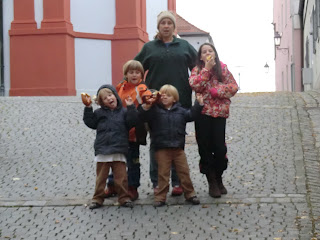 My Mommy worries when I don't blog.  Like there is something I am hiding from her.

Well yes, Mom, I am hiding a lot lately, thanks for asking.

Which is why I write about koala poop and today thought I'd mention our 5:45 AM capture of the Huntsman spider the kids found in their bedroom.  (Piece of cake, by the way.  Doesn't even faze us anymore.)

What the Huntsman is covering up is 3 blogs on Ego and Taoism, mushy pieces of self-discovery and personal growth that I really didn't feel the need to burden everyone with.  (Although, I suppressed the Ego, tried to remember that it was NOT all about me, followed the path of least resistance and had the satisfaction of it following the path I had wanted all along, WITHOUT my Ego pushing it.  See why I saved you the trouble of reading it?!)

The Huntsman is also covering up 4 blogs on German collective guilt and shame.  One of which I will post this week.  Again, not sure I need to go there publicly, but hiding it hasn't been making it go away either.

One of my friends has a son undergoing a second round of chemotherapy and bone marrow transplant for childhood leukemia, on Friday one of my best friends here ended up in the hospital with a brain anuerysm and yesterday my mom told me she was going back in for surgery and chemotherapy for metastasis to the liver from her colorectal cancer 6 months ago.

Which really puts the cough and fever that has laid me out flat for the last two weeks in perspective, doesn't it?!

And makes the blog I have been researching on the Burke and Wills exploration and what it says about the Australian spirit seem fairly trivial.

I find myself completely unable to deal with Japan and natural disasters.

And then they throw Libya in the mix.

All of which brings up my belief in karma and reincarnation and makes me question again why the Christians did away with such an intuitive concept.

Making it hard to focus on the blog about Andrew being selected as goal-keeper for the travel team in soccer.

By which I mean to say that things are business as usual around here.

I have a hard time hiding anything from my Mommy.  Probably made her wish she hadn't asked though, didn't I?!
Posted by Twintensity at 5:50 PM