Koalas in the Courtyard: Week 9

I picked up a literary magazine two weeks ago for inspiration.  (Writers Forum out of England.  Some fantastic hints on writing and some great competitions to enter.) 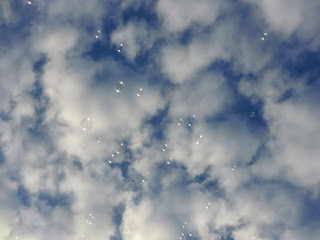 In it, Barbara Dynes told me I was a lazy writer, one of those 'full of ideas' people who write all the time but get so many new ideas that they never stick to any one thing.  "If you're one of these people, understand that you are being lazy not creative: you would rather play about with a new idea than get down to the hard graft of writing the story, wouldn't you?"

Well yes, Barbara, thanks for asking.

Also Barbara you forgot to mention how absolutely brilliant all of my ideas are and how my devoted audience - all 23 of them - wouldn't know WHAT to think if I didn't share them!

The upshot of Barbara's article was that I wrote 6 blogs and didn't post them.  Which really wasn't helping either, since the one thing I have consistently done for the past two years is this blog!  I also entered a small 100 word local library competition.  And ANDREW's been published in the school newsletter.  Does that count?

I once again got to work on the NOVEL.  This time I started with my characters.  They are parts of me and parts of my past, but they are beginning to breathe on their own.  I have a setting and I have a conflict.  And I am going to go from there.

I've been avoiding my piece on the Brisbane floods versus the Haiti earthquake because it was just too overwhelming.  (Sorry about that Jim!)  But hmmmm.....now believe a piece on Haiti versus Christ Church would be much more appropriate!  I'd have to work instead of ramble, even edit and rewrite (UGH!) but it would be character building.  And quite possible something to publish.  Oh yeah, I tend to forget that part of the writing process.

My excuse for continuing my manic ravings on the blog is that -  number one, I really like the validation of hitting 'Publish Post, number two, it is the only way most people are able to keep up with me right now, and number three, I like to think the ideas I develop here are ideas that my characters can build upon and make their own.

But.... I am going to TRY to limit my Australian school system raves to one day a week.  I'm sorry.  You know I love it here.  But there is no reason to keep hitting you over the head with it!

﻿
﻿
1.  Two of the sports captains were commended for GIVING THEIR OWN SUNHATS to two students who otherwise wouldn't have been allowed to play outside during break period.  It has been HOT here.  Tuesday hit over 35C again (over 100 Ffor you Americans!).  And, while it is not a DRY heat or a MOIST Florida heat, it is a RELENTLESS, sun-scorches-you-the-minute-you-step-outside kind of heat.  Students are not allowed to play outside without sun protection.   These two young men, when they ran out of the school-supplied spare hats that they were distributing with sports equipment from the sports shed, didn't think twice about GIVING THE HATS OFF THEIR HEADS to two other students in need.  The generosity of Australians never ceases to amaze me.  It is one thing to give a spare.  It is quite another to give YOUR OWN.  Shades of St Martin giving his cloak to the beggar.  Aussie-style.

2.  Was it Melinda or Ms Egan, our principal, who asked the students what they should do when they see another student by themselves at lunch time or break?  I can't remember because I was busy flashing back to the bullying and take-care-of-yourself attitude of our German schoolyard.
"They need to learn to take care of themselves."  Or, the classic from Ryan's 2nd grade teacher:
"I don't expect the children to allow everyone into their games.  They are allowed to exclude others.  Because that is life and they need to learn to deal with it.  We don't all get alone with eachother as adults so I don't think we should expect the children to either."

Uh.  Heads up.  Aussie adults seem to get on quite well, thank you very much.   Maybe because, since they were small, they have been taught that if you see someone else alone and lonely you should ask them to join you.  "Imagine how you would feel." said Ms Egan.

Which is why you see kids from ages 5 to 13 playing together in the courtyard.

And which maybe, just maybe, is also the reason those two boys didn't think twice about giving their hats to someone else in need.

3.  We ended with Prep D - Aidan and Matthew's class- singing a little song they'd rehearsed.  "Friendliness is the cure for loneliness."  I honestly couldn't love this country - or this school - more.


On a side note, Aidan did get his first Student Achievement award this week.  I have to point out that he received it - for participating eagerly in all group and small group activities and behaving with respect and courtesy at all time - the week that Matthew was out sick for two days.  (Fever.  He's fine now.)  Does make you think about the advantages of separate classrooms for them.  Because the one seems to shine when the other isn't there.


And another of Andrew's essays was posted in the weekly newsletter.  Let's face it: the guy knows how to get recognized.  Some might call him a 'suck-up'.  As his mother, I have to call it 'knowing his audience.'  This is what he wrote.

School is very, very fun.  Not only recess but everything that is going on.  Koalas running across the lawn...exciting and totally cute!  LOTE (Language Other Than English - which is Chinese or German depending on the day!) is good, PE is fun and reading is the best of all.

My teacher is the best and works at the best school ever!

Boy does that kid know how to get invited to the monthly Principal's Tea!
Posted by Twintensity at 12:01 PM