We're Not Going To Take It! 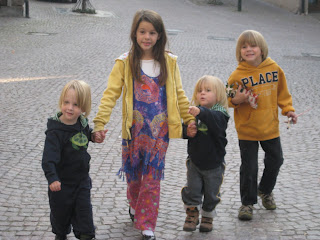 I've taught the kids some "Twisted Sister" lyrics this afternoon. And then we all practiced headbanging - which, it turns out, hurts my neck more than it did 15 - 20 years ago - jumping off the furniture and yes, defying authority.

What have I been thinking? Here I am, trying to teach my kids to fit into a society that actually will benefit more if my kids don't try to fit into it.

Let's face it, I was really self-conscious, as an American who expects immigrants to adapt to America, that I should try to integrate into our adopted country as well. Learn the language. Respect the culture.

Been there. Done that. Bought the Lederhosen.

Ryan (yes Ryan again, I don't want to get into it) came home almost in tears because her bicycle didn't pass inspection again this week. Let me explain. The fourth-graders in our part of Germany all study, and practice, and then are tested, on bicycle safety and traffic laws. By the police. Which all sounds nice and harmless and very civic minded - until you see the list of bike requirements.

I told Ryan she could tell the police officers that if they expected every child to have a safety kit - including first-aid, repair and pump - then they should feel free to go ahead and provide one. I also told her to tell them that her family didn't feel they needed one, since we just stopped and asked a German for theirs if we ever ran into any trouble. And, I have to be fair and honest here; whenever any of my children gets injured on the playground, two or three people come running to us with first aid kits. And we have asked a passing bicyclist for the use of his pump when one of our tires went flat; of course he had one and he was glad to help.

Poor Ryan. It has to be the year she takes a bicycle class from the cops that I decide to start resisting authority again.

On the other hand, her bike finally passed inspection on week three when she explained to the police that, although her rear light was not the required red, the light blue showed up in the dark just as well. Reasoning with the police! In Germany! You go girl!

The problem lately has been unreasonable demands/expectations from the school. Too much homework. Money for books. The bike thing. But the other problem is that the other mothers just go along with it. They bitch and they moan. Their lives suck too. But it's the way it's always been. It's the way it's going to be. And it's just something they have to get through.

Which I why I finally called an Italian mother about the book thing. I had just received a letter from the school telling me that my daughter had destroyed a book to such an extent that we were being required to pay for it. Huh? Come again? I had seen the book in question - albeit last year - and never noticed any damage. Had she torn the pages out, defaced it with doodles, scrawled all over the margins? Nope. It's a little tattered, dog-eared from use. But the way the letter was worded in German was as if she had intentionally destroyed it. And it begged our forgiveness but was sure we would understand and forward the required money. A German friend of mine said it was standard and that she'd had to do the same thing the year before. It was the school's way of getting new books subsidized a bit from the parents, she figured.

My Italian friend and I saw it differently. "I've been here ten years," she said, " and it's time to draw a line and tell them when they are wrong. I'm not just going along anymore." How did I even know she had received a letter about a book? Because her daughter and mine were chastised in front of the entire class. Her daughter is also distraught that her bike hadn't passed inspection yet either.

The police had told the children that if their bikes hadn't passed inspection by next week they would no longer be allowed to participate in the program.

Let me repeat that. The police had told the children that if their bikes hadn't passed inspection by next week they would no longer be allowed to participate in the program.

The authority figures are threatening - and shaming - the kids in school. Is it only the tea-dumping Americans who see something wrong with that?

I could obviously start in on a rant about the German mentality - again - or I could just teach my kids that it's not only okay to be different, but that I expect them to defy the status quo when they feel it is wrong. I tried it this afternoon. "The Germans are crazy." I told them. "But you have a choice about who you want to be. You're only a quarter German which still gives you a fighting chance." My sarcasm , fortunately, goes right over their heads at the moment.

We talked about doing what was right, even when the powers that be tell you not to. We talked about freedom and individuality and standing up for yourself; about being who you are and not who the system is trying to force you into being.

It may be even harder for Andrew than for Ryan. At least she never stands a chance of being what they want her to be. Andrew came home from school with his first math test. 52 questions in 20 minutes. The test that took Ryan 22 minutes - and she got half right. He not only got all 52 questions right, he did it in 9 minutes and then had time to draw an intricate mural on the back. How do I know it took him 9 minutes? Because it turns out they are timing - and praising - and comparing - and therefore - once again, shaming, the other kids in the class who aren't meeting the gold standard.

It's easy to be the golden child in Germany.

Which is why he's letting his hair grow and learning to play electric guitar!
Posted by Twintensity at 5:13 AM