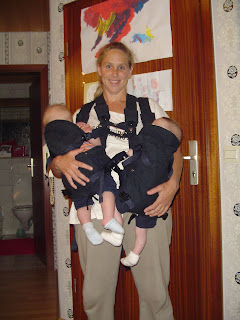 February 18, 2009 by christine steinmann connor
I have Baby Bjorn envy. It’s what a mother of twins experiences every time she has to haul two babies out of the car in the middle of a rainstorm, get them both strapped into the doublewide stroller, find an entrance into the mall that doesn’t involve stairs or escalators, and then change and nurse them both, alone, in a restroom designed for mothers with one child. Exhausted, with one screaming child and one sleeping (so that they can reverse roles again in another hour or so), pushing the darn doublewide the length of the mall just to get to the one elevator...and then you see the cute young mom in the pink sweater, languidly walking past the shop windows with her one baby sleeping in the baby carrier. The baby’s sweater matches mom’s, so that the baby comes across as just a nice -quiet- accessory to top off the picture of perfect motherly bliss. I know. I know. That picture isn’t true. Mom is exhausted too. She is bored at home and frustrated at not getting anything done besides diapers and feeding so she needs this break as badly as you do. She NEEDS the picture to convince herself that everything’s okay. Motherhood is hard and she deserves a break.
But see, SHE gets the break. SHE gets to use the escalator. SHE gets to have ALL of her babies sleeping at once. A friend of mine recently asked me how I was doing with the twins. And I told her it wouldn’t be so bad if EVERYONE had them so that someone else would be able to relate. Just after that another friend at playgroup, with ONE baby, asked if I could change one of the twins outside in the hall because of the smell. And by the time I got them both ready to head into the hall I really figured I might as well just put our coats on and just keep going. It was just too hard.
People cut you some slack for the first year and pile on the praise and admiration. But after that it’s just considered routine that you show up with two kids while they show up with one. And, preoccupied with the difficulties of caring for one toddler, noone remembers that you’re doing more than twice the work. I’m going to stop complaining because, as another friend said, loads of women would love a second child and cannot have one, but I am also going to cut myself the slack that I don’t get from others.
I’ve got double the trouble and double the joy. But I think that’s just what they tell you to keep your mind off the Baby Bjorn.
Posted by Twintensity at 3:45 PM