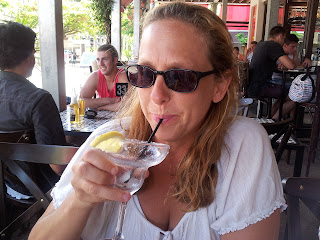 The world has a sound loop running through its collective consciousness and it’s stuck on R.E.M.

Were they prophesying the Trump Apocalypse or the legalisation of marijuana for recreational use when they penned the lyrics stuck in our minds throughout this past week?

Looking back, some do seem eerily prophetic.
The song was put on a 2001 list of what not to play on the radio following the 9/11 terrorist attacks.  In addition to the End of the World refrain – which were actually quite appropriate to 9/11 and the events since – there are such beauties as:

And if anyone is wondering why I am blathering on about REM lyrics when what I really want to do is talk about Trump, well this last time I felt this way was when I watched those planes crash into the towers.  I just knew my children – I was newly pregnant with the second – would grow up in a world vastly different from the one I had grown up in.

(It’s okay Jim – I know the entire beginning would be edited out– but I am good with that.  It is why I blog!)
And look here – I edited out the Obama blip myself!

Back to R.E.M and their Trump prophesy:

Yes, they actually used his name.

And when I start to get even more off track and read into the lyrics like a literature student I see references to Hillary Clinton – they used the word “she” and “Furies breathing down your neck.”  I begin to realise I could start a cult based on REM prophesies.

Which isn’t what I set out to do when I got up this morning to write this.

But listen up America:

“World serves its own needs, listen to your heart bleed.”
“Offer me solutions, offer me alternatives, and I decline.”

Yes, young people, this is a life-changing, earth-shattering event.  It is the “End of the World As Know It.”  It is the Apocalypse.

And you know what?

It is also just life continuing as it always has.

To quote another great line – From Kay in Men in Black:

“There’s always an Arquillian Battle Cruiser, or a Corillian Death Ray, or an intergalactic plague that is about to wipe out all life on this miserable little planet, and the only way these people can get on with their happy lives is that they DO NOT KNOW ABOUT IT.”

This is just another blip on the heart beat of humankind.

Leo Tolstoy – the R.E.M of his time – wrote a little book called “War and Peace” about Trump.  (And now Jim, we can actually start the article!) You guys would have liked him; he was a man writing to discover the truth about what made humankind do the things it does.  And how one person – like Trump  - can ride on a wave of populist sentiment.  And you know what?  Leo decided that one person CANNOT and does not change the world.  But that each one person can and does, collectively, according to the general will.

First, Leo determined that there is a divine plan. If this doesn’t appeal to you, stick with the Men in Black quote.

Second, he decided that certain individuals – like Napoleon and like Trump, like Obama for that matter – come along at the right time as consequences of mass sentiment.

Is it good?  Is it bad?  Hey, at least the heart beat of humankind is beating.

It is now up to every individual in America – and every one in the world  - to make sure that the president they have collectively voted into office, serves the need of the people he represents.

Oh wait a second?  You mean Trump – or Obama or Washington – doesn’t RULE the USA?  You mean the USA was founded as a democracy based on the will of the people?  You mean George Washington – who refused not only a third term but an offer of royal rule – set all these pesky checks and balances in place to prevent one person from ruling the country alone?  You mean the Founding Fathers of America knew what they were doing when they created The Senate and The House of Representatives?

You mean these people are here to carry out our will?

It is still your country, America.  Your president serves you.  It is up to each and every one of you to make sure that your will is carried out.  And if that means tolerance and compassion then make sure you show tolerance and compassion.  Make sure you show it to your neighbours and to strangers on the street.  Make sure your congressman and representatives in parliament know what you want.  Trump cannot set up a registry for Muslims if you do not allow it.  It goes against the very fabric of a country founded on religious freedom.  Trump cannot build a wall if you refuse to pick up the stones.  (I borrowed that from Tolstoy who said no war would ever be fought – no matter what the ruling authorities said – if every individual refused to pick up a gun.)

And maybe most importantly, get to understand the people who voted for Trump and why.  Maybe try to see how those of us from the coasts and cities have separated ourselves from the heartland.  How we’ve become a split nation not able to understand one another’s needs.

If the will of the world is starting to become self-serving and isolationist – and you don’t like that – then it is up to each and every one of us worldwide to do something about it.  Our individual wills and actions make up the collective consciousness that brings people to power.

Trump is our president.

Posted by Twintensity at 5:11 PM