We have been in Australia for just over two years now and this will be our third Christmas.

Our first Christmas was right before the big Queensland floods that devastated the area.  It HAD been raining a lot, but we didn't notice, having just come from Germany.  Then the dams flooded and we realised this was more rain than usual for southeast Queensland.

This Christmas finds me a little embarrassed to report how well we are doing.

The bridge that was damaged in the floods is fixed again just under two years later.  Can Haiti say that? Japan?  Christ Church? 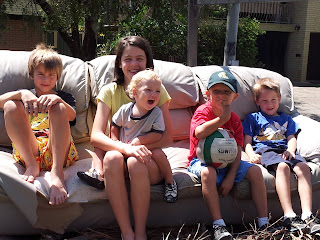 We really do live in the lucky country.

I don't miss the snow and cold at all.   We love the beach and barbeque and plan to have nothing but hotdogs and french fries for Christmas.  Which we'll call sausages and chips.   Although it wouldn't kill southeast Queensland to open at least one biergarten or outdoor cafe.

Our kids really do go to one of the best primary schools in the area now.  This after much soul-searching and self-discovery.  They aren't in the gifted and talented program - yet - but are at least back up to the academic standards expected by the National Curriculum.

Andrew really is a star soccer and baseball player.  Although he is too short to play basketball.

He stopped karate back in Germany because he told me he didn't like to fight.

I couldn't be prouder.

Ryan has decided to try her hand - or hips rather - at gypsy dancing instead of ballet.  She hasn't given the modelling a go after all.  But she probably could.  If her father wasn't considering trying to make her wear a burkha.

Meanwhile she expects a Thoroughbred for Christmas.  Although a Warmblood will do.

She and I are homeschooling.  Repeating sixth grade was a lot harder than I thought it would be, mostly because I kept having to remind myself that beating her wasn't going to help any.

NASA hasn't come knocking about the space station yet, but we think they just don't trust us anymore.  Because we talk kinda funny now.  Why do I have a foreign accent in every language I speak?!

Damon IS actually coaching the baseball team.  But noone really wants to hear him sing.  We don't go to church.  And the dole is so good in Australia that I don't believe we have a homeless shelter.  The weather's good enough to sleep outside.  And wasn't there something about just setting up tents in front of government buildings this year?

I am, as usual, having troubles living up to my own expectations.  I still speak to the kids in German sometimes, but mostly when they are getting in trouble.  I'm having more difficulties with the English, not sure if I am speaking American or Aussie or maybe just Queensland dialect.  Not sure how this is going to help my resume.

Having that extra kid probably didn't improve my employability rating either.

Ryan and I did repaint some kitchen chairs.  They make me feel like I've got something to show for all of the homeschooling.

I cooked for the first half of term and still do homemade pizzas on Fridays.  I am beginning to abhor the smell of meat, something that is not going to bode well for our protein content since I also don't like the thought of preparing peas and beans.

I do have my Queensland veterinary license now.  And know they spell it licence here.

Which I still find weird and wrong.

And although I have started my young adult novel about a journey of magic and self-discovery, I am afraid my protagonist will get knocked up by the good-looking and enigmatic bad-boy-next-door before they find the door to the magic kingdom that shows them their potential to be so much more.

It's been the year that we learned what school sores were.  The hard way.   (Heads up, it's called impetigo in the rest of the world and they ain't kidding when they call it highly infectious.  Yuck.) The year we became illegal migrants and got sent to New Zealand for three days as punishment.    The year my tarot told me to "let go and let God."  Along with just about everyone else I know!  The year Grandma died.

Maybe she's up there intervening on our behalf.

Because all in all, it's been a good year.