When the Aussies get a hold of something, no matter how traditional, they tend to make it their own.

It's no different with the Abbey Medieval Festival. 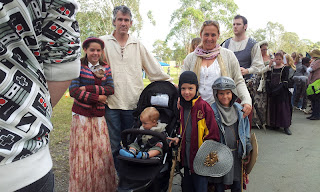 The sun is shining, the sky is blue, the atmosphere is warm and friendly; none of this dark and gloomy middle age realism for us.  (The pouring rain and mud on the first daythis year  DID lend an air of authenticity to the proceedings - oh look, just like Germany, we said! - but the day wasn't any better for it.) 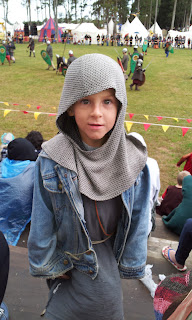 The first thing I noticed was the audience at the joust.  In the USA, you get teams going, you cheer for YOUR knight, you loudly BOO the opposing knight.  There are clear sides, theirs and ours, winners and losers, friends and enemies.  All in good fun of course.  But you do pick a side.

The Europeans give it a go but they are pretty embarrassed about the whole thing.  So that you have some poor fools - really, you can call them that at a medieval festival! - trying to rally up a crowd that just doesn't have it in them.  A few-half-hearted cheers.  From the beer drinkers.  But mostly polite silence. 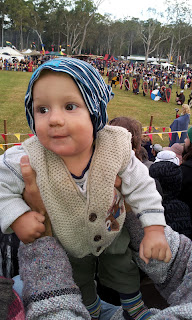 The Aussies, well they'll give the American a run for their money on enthusiasm, but their hearts just aren't in the competition.  Whoever heard of a crowd cheering for BOTH knights?!

Fencing with laughter, tourneys where the injured help one another up, friendly rivalries between monarchies, knights taking time to play with the kids...joking and smiling, a less medieval crowd I've never met, but a most chivalrous one. 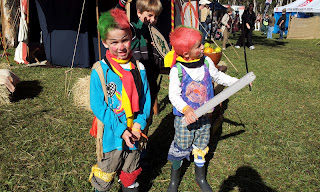 This year's wonder was the churro line.  Really.  Pouring rain on the afternoon of the first day.  A churro line about half an hour long.  (And this is REALLY long in sparsely populated Oz, let me tell you!)  Actually, what we thought was TWO churro lines.  Because some REALLY REALLY REALLY LARGE, unhappy, nasty person stood near the front and neglected to tell those of us behind her (him?) that he/she wasn't in line.  So that after twenty minutes we realize there is no line.

I look over to the REAL line, look back at the line of about fifteen people behind ME in the fat lady/person's line, and tell them that there's been a mistake.  Sorry, mates, the wait is actually twice as long as you thought it was.  We're going to have to merge the lines. 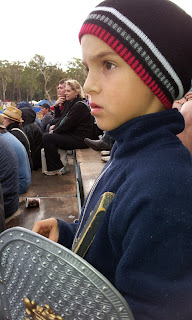 I'm not sure what would happen in the US anymore.  Really no clue.  But I know there would be fighting and bitterness in Germany.  Although, granted, there would have been fighting and bitterness anyway since Germans don't stand in lines and would have been pushing and crowding eachother from the get-go.  Germany isn't all bad.  It's not, really.  And there are good people there.

But the Germans do NOT stand in line and they certainly don't watch out to make sure others have a fair go. 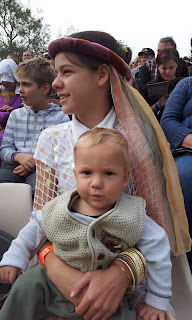 The Aussies sighed a bit, looked around and then calmly melded into one line.

The girls ahead of me told me that actually I should be in front of them.

Everyone knew - and you can't tell me the Germans don't, they do -  where they were in relation to everyone else.

And everyone fairly waited their turn without complaint. 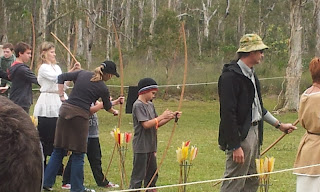 And that's what works here - medieval fest or not - this sense of fairness and watching out for one another.

Sure, you've got some assholes.  Take fat lady/man nasty person who delighted in telling me that there was no line behind his/her fat arse...but only after we had been there twenty minutes.

But for the most part everyone treats eachother fairly.

The Aussies have no idea how lucky they are.  They haven't had to push through the crowds at the Bronx Zoo or the Stuttgart Zoo or fight to get on a bus in Haiti or India or Africa. 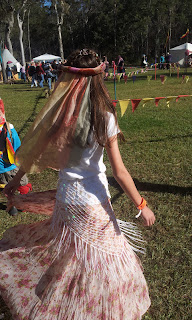 They melded into one line.

Aussies give me hope.

And make for the most awesome medieval fest anywhere in the world!

Posted by Twintensity at 9:28 PM