I've only ever sent one book back to Amazon.  It was a diet and health book written for women.  It began with the words: every woman should take the time to wake up slowly and have some time for herself each  morning.
I was livid.  Who was this lady kidding?!

I've had similar issues with a recent diet and exercise plan I signed up for online.  Free.  Through one of the television stations here.

Even if I did have the time to shop for all the exotic produce on the menu, there is no way at all I would find the time to spend over an hour making up a salad.  Sorry, it's rip off the lettuce, slice a quick tomato and some mushrooms if I got em, maybe a cucumber and sprinkle it with sunflower seeds if I'm feeling particularly fancy.

Yesterday I simply took the head of lettuce out of the refrigerator, ripped off some leaves, and shoved them in my face on the way out the door to pick up the kids.  Honestly, who has the time?!

This morning I poured the granola cereal into the bowl.

And then poured it back into the box before driving the kids to school.

This strategy seems to be working for me.  I've lost ten pounds in three weeks.

I 've tried the so-called sensible diet plans.  Is it just Australia or is everyone eating every two hours now?  I mean honestly, who needs this sort of pressure?!  I'm generally already running behind by 10 AM, combining morning tea with lunch at 2 PM which makes afternoon tea late.  So that I have no appetite for dinner.  And do I HAVE to stay up for evening tea?!

Can I just stick to boiled eggs, baked squash and tuna fish, please?  Plus that nummy lettuce I can now eat on the go!

Then there's the exercise.  This seems like a reasonable thing to expect.

I started when the baby was 6 weeks old.  Up at 6 AM anyway.  Might as well take a walk.  Even found time for 20 minutes of AM yoga.  And evening too.

By the second week Ian had figured out he didn't like the yoga tape.

So I tried abs.

You'd think I'd get the six minutes in to do abs, wouldn't you?

I gave up until I ran into one of those women at a pool party recently.  There I was, fat and happy, breastfeeding and eating and in walks this petite, slim but curvaceous (still breastfeeding the last one) redhead, her three children, ages 3, 2 and 10 months, all dressed in khakis and grays like something out of a Bennetton commercial.  I put down my chips long enough to think "crap."

It's bad enough these people exist in magazines ads but do I really need to get to know them personally?!  (Yes, really, her first two are 11 months apart and the third 18 months behind that.  Australian powermums can really put the rest of us to shame!)

I had to admit - she was really really nice too, the bitch! - that if she could exercise with three toddlers I could probably figure out something to do with my four month old.  Who is still more of a weight belt than anything at this stage.  So now I do baby triceps and baby situps and baby squats.  Ian really likes the baby squats.  I had to do them through a Parents Coffee at the school recently to keep him quiet.  He'll actually lift his legs to his stomach and grunt along when I do them.  Baby butt raises work well too since you can sing "Hoopah Hoopah Reiter" to them and bounce the baby on your belly to the rhythm.  He really gets a kick out of those.  He's laughing AT me, not with me, when I do situps, but I try not to mind.

The neighbours are getting used to seeing me carrying him around the block "Minion" style in the Baby Carrier on days when it is neither too sunny or rainy. 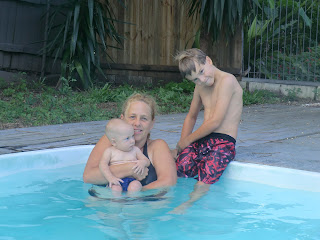 Then a friend pops up unexpectedly telling me that she just hopped the fence (they DO that here!) because the neighbour's twenty-something year old son told her I would never hear her knocking on the door what with all that singing and dancing going on.

And afterwards I promise not to feed you either!
Posted by Twintensity at 6:20 AM